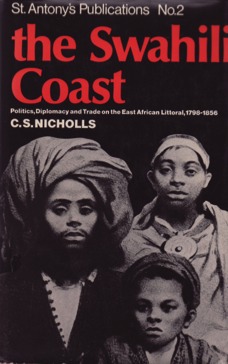 The Swahili Coast deals with a sixty-year period in which Arabs from Oman in Arabia extended their influence over the East African coast from Mogadishu in the north to Cape Delgado in the south. This region had a culture and a way of life quite distinct from that of the interior, and had always been an area of great maritime activity. For hundreds of years, Arabs had come down on the monsoon winds to trade there, and for two centuries the Portuguese had controlled the region.

In the course of the period covered by this book the ruler of the Omani Arabs transferred his seat of government from Arabia to Zanzibar. This involved him in delicate relationships with the western powers who developed strategic and commercial interests in the area, and in conflicts with the local inhabitants of the East African littoral. Based on many original and hitherto unpublished materials, this book illuminates the reasons for this extension of Arab influence in the western part of the Indian Ocean, and shows the growing involvement of western powers with the politics of the Sultanate of Zanzibar.

Attention is also focused on the development of trade on the Swahili Coast, as well as the reaction of the local populace to Arab and western pressures. These are matters which have previously been neglected in books about East Africa. This study will be particularly useful for advanced students of African history and to anyone interested in the political, social and economic development of this area.