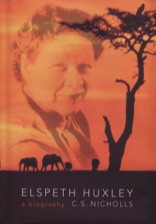 lspeth Huxley, who died in 1997, is chiefly remembered for her lyrical and evocative memoir The Flame Trees of Thika (1959). Yet this was only one of the thirty books she wrote, and it took just a few months of her remarkably active life to compose. A woman of compelling personality and exceptional energy, Elspeth Huxley was not only a celebrated writer, but also a farmer, broadcaster, journalist, conservationist, political thinker, magistrate, and government adviser. She was a vivid chronicler of colonial Kenya, and became increasingly recognized as an observer and interpreter of African affairs over a period of profound change. Initially a staunch defender of the white settlers, she would later come to support moves toward African independence. After a childhood spent in East Africa and wartime Britain, Elspeth married a grandson of Thomas Huxley and cousin of Aldous Huxley, whom she knew well. Her wide circle also later included George and Joy Adamson, the Leakeys, and Peter Scott (whose biography she wrote). Whatever their subject, her books reveal the adventurousness, warmth, perception, and occasional astringency that made up her own personality; they are also notable for their acute observation and great social range, encompassing the lives of Kenya’s poor white farmers, the frivolous Happy Valley set, and Africans alike.

"Nicholls' account of [the Huxley's marriage] adds another sphere of interest to a life that already has more than its share of fascinating facets. Nicholls...bears the unusual distinction of having served as editor of Britain's prestigious Dictionary of National Biography. Thus it is not surprising to find that she is a judicious, intelligent biographer who brings to her enterprise grace, balance, and deftness."